Well, it’s almost noon on Good Friday. Jesus’ crucifixion had probably begun the 6th hour of the day as Apostle John records, and that would have been 6:00 in the morning. Jesus was so popular (remember his triumphant entry just a few days before there in Jerusalem), and the arrest, the trumped up charges in the “Jewish court”, the beatings and the questionings had been done in the early morning hours so the general public would have no idea Jesus was on trial. Jesus’ followers probably would have revolted, but it all happened according to God’s plan.

Jesus’ garments had been divided, Jesus had been taken down from the cross, and he had been placed in a tomb bought for him by Joseph of Arimathea. What a bleak and sad Friday for Jesus, his family, and his friends.  However, as we know, and as we should always remember, it is our “Good Friday”: the day our Jesus (the sacrificial lamb without sin) took on our sins so we could stand before our God cleansed, sinless, and as white as snow. 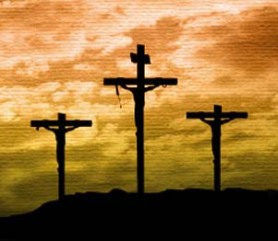