How time flies, and what a blessing Carter has been. Just Tuesday morning (10-30-2012), Carter woke up called from his and Ammon’s dark bedroom, “Daddy?!” Often times if Carter doesn’t wake up feeling too rested and “cranky” he yells for me, so with a bit of concern in my voice I answered back to him from the kitchen, “Yes, son?” He then called back, “I love you!” ….yet another heart-melting moment from my son.

God, Thank you for Carter, and, Carter, may your 4th year be a blessed one.

I really want Ammon & Carter to enjoy the night woods with me. It will be hard for me to go alone w/o them, but I will not be gone for long either with them or w/o them. I’ve gotten out of the night tracking since Carter and Ammon came almost 4 years ago, and I’m looking forward to being in the woods for myself and for my hounds. Here are the hounds on Friday morning (10-19-2012). It was cool, crisp, and just “hankering” for a frost ( I could tell, but it was only 42 degrees here).

A continued, Happy Autumn everyone (Bless your hearts…Aussies and Kiwis, A continued Happy Spring to you! LOL)

Sissy is okay…LOL…….she was bending down to roll.

Ammon and Carter have started earning some “spending money”/allowance. They are picking up toys and putting them into their toy boxes, folding clothes, putting up clothes in their armoires, picking up garbage, helping feed dogs, making their beds, etc.

I know this isn’t much, put they are getting about $1/week (in quarters). Last week they earned enough money to go to our local Dollar Tree and buy something for themselves. However, before they did, they had to give 25 cents to church. With the remaining $1.25, they chose their presents. Carter chose a crawling soldier, and Ammon chose a hair piece to wear. We are saving their change and future allowances for continued giving to themselves and back to OTHERS.

Please pray that they keep a good work, saving, and GIVING ethic. So far, we’re off to a good start.

I think the best part was the hay ride (it smelled sooooooooooo good!!). We were a bit early, and we had a “private tour”. Ammon & Carter are almost 4 years old, so I think that with their memories, pictures, and blogs (LOL), they will remember this trip for years to come. After the hayride, Carter and Ammon helped pick out our pumpkins to make jack-o-laterns. Great Place that Burt’s! 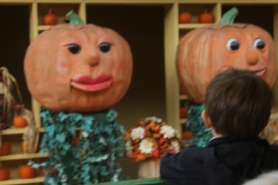 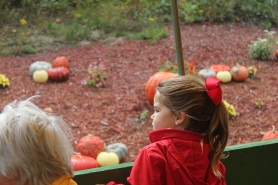