Her full name was Mary Naomi Alexander Caylor.  She was born May 15, 1918. May 15 was also her father’s birthday who was born in 1875. She was born in Smyrna, Georgia, but she grew up in Atlanta. Her father worked for Southern Railroad as an engineer, and he was killed outside the tunnel at Braswell Mountain near Rockmart, Georgia when his train exploded in June of 1935. Nanny, her mother, and sisters moved to Varnell, Georgia where her mother (My Nanny Alexander) was born and raised in January of 1936.

Two years later, she married my grandfather, Troy Dewitt Caylor, and 10 months later my father, Oliver Haven Caylor was born. Their second son was born in January of 1943. She outlived her parents, her sisters, her husband, and my father. There was a part of her soul that was like Naomi from the Bible especially when Biblical Naomi told the people to call her Mara which meant “God has dealt bitterly with me.” However, she leaned on Jesus Christ as her strength and her redeemer and never forsook him. She was a great mother, a spectacular grandmother, an exemplary Christian lady, and a great friend to me.

She was my Bible study confidant, and we loved to talk about world traveling and world events. We also shared good short stories, classical literature, and she was a walking treasure trove of family, oral history. I could listen to her talk about our ancestors and her childhood forever. Literally, we could sit up until 2:00 or 3:00 a.m. simply looking at pictures, family Bibles, or family heirlooms. We had to make ourselves go to bed. When my father died in 1982, she and I leaned on each other in our bereavement. I was so glad God let me have her for three more years. Nanny died on August 10, 1985. She has been dead for over 25 years now, and I still dearly miss her. It is also a treat when I dream about her and her house, but, of course, a part of my heart is lonesome when I awake and she is only, once again, in my memory and in those dreams.

I cannot wait to share all these things plus tons more with Carter and Ammon. Nanny will live on through them. Happy Birthday up there in Heaven, Nanny. We love you! 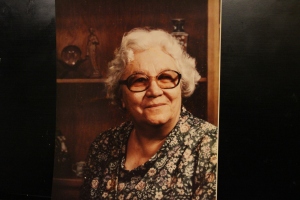