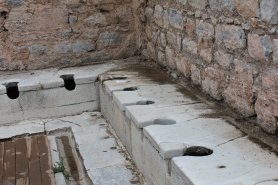 Our trip to Ephesus/Kusadasi, Turkey last October entailed learning how the Mediterranean Sea has retreated in 2,000 years and Bible history.

Since the time of Paul the Apostle and the Apostle John, the Mediterranean Sea has retreated some 14 miles back to the port of Kusadasi. The people journeying to Ephesus via the Mediterranean would have ported very close to the Temple of Diana one of the 7 Wonders of the Ancient World. After all the years of fires, rebuilding, earthquakes, rebuilding, the temple was never reconstructed. In an open field there, is a single column remaining that represents the magnificent temple.

Ephesus was built on the side of a mountain. The tour began at the top of the city, and we worked our way down. It was so amazing to see the ancient roads, the ancient latrinum (bathroom of toilets) of the rich, and the amphitheaters.

Antony and Cleopatra also “hung out” in Ephesus for a while. While I was there, I learned that these two conniving love birds had Cleopatra’s sister, Arsinoe, murdered in Ephesus.

Ammon and Carter spent their FIRST excursion without a stroller. They did great, and it wasn’t easy for their little legs to make it over two hours of touring the ancient ruins.