It was the first rain of the autumn in Rhodes. It had not rained for MONTHS! 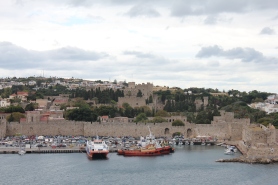 I think we were all surprised how Medieval Rhodes was. The crusading knights who went to the Holy Land to deliver it from the Muslims decided to hang out there for several hundred years, and they built some medieval structures.. 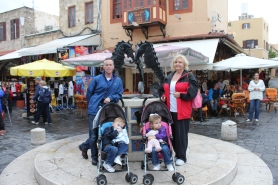 One of the Seven Wonders of the Ancient World, The Colossus, stood in the harbor several thousand years ago. It only stood for about 50 years, and it was toppled by an earthquake. Historians are saying that it did not strattle the harbor as depicted in many drawings because it would have hampered trade while it was being built, so, they say it probably stood at one side of the harbor.