I didn’t like the taste of blackberries until I was an adult. They are an acquired taste, but once you acquire that taste, you’re hooked! The unfortunate part is that they grow on briars, and it is inevitable that if you are doing some serious picking that will produce blackberry jam, blackberry cobbler, or possibly blackberry, homemade ice cream, you will get scratched by some thorns. However, the rewards are delicious. 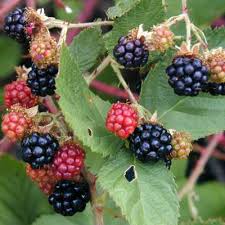 Right now it looks like we are going to have a plethora of blackberries. I ate some Saturday during a mowing break. They were scrumptious: that tart yet sweet taste. All during my 20s I had a pet German shepherd named Judy. She enjoyed blackberry picking with me. She knew the difference between a non-ripe, red blackberry, and the ripe, black-purple blackberry. If there was a ripe blackberry at her reach, she would gently pluck it off and eat it. She was the best blackberry picking buddy I ever had. Here’s to you, Judy.