I think the best part was the hay ride (it smelled sooooooooooo good!!). We were a bit early, and we had a “private tour”. Ammon & Carter are almost 4 years old, so I think that with their memories, pictures, and blogs (LOL), they will remember this trip for years to come. After the hayride, Carter and Ammon helped pick out our pumpkins to make jack-o-laterns. Great Place that Burt’s! 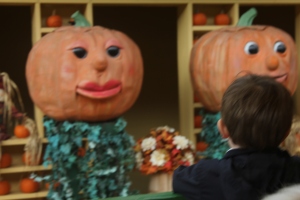