I wasn’t pushing a stroller in the crowded Long Market this time. 10 years- old Carter and Ammon were walking and taking care of themselves in the streets of Gdansk this time.

In 2010, we had taken a day tour of Gdansk ( 20th Century European scholars may remember it with its German name, Danzig). Pushing strollers through the hot (there was a heat wave in the Baltic area that summer… temperatures in the 90s in Gdansk, Poland, St. Petersburg, Russia, and Stockholm, Sweden) was not comfortable, but there was something very likeable about Gdansk. This was one of those times an excursion from a cruise planted a seed, a goal, for the Caylor-Browns to return to an historical and charming European city. We saved and prayed, and God blessed us with a return in the summer of 2019. I’ve already shared Budapest  and Warsaw, and now I will continue with Gdansk. 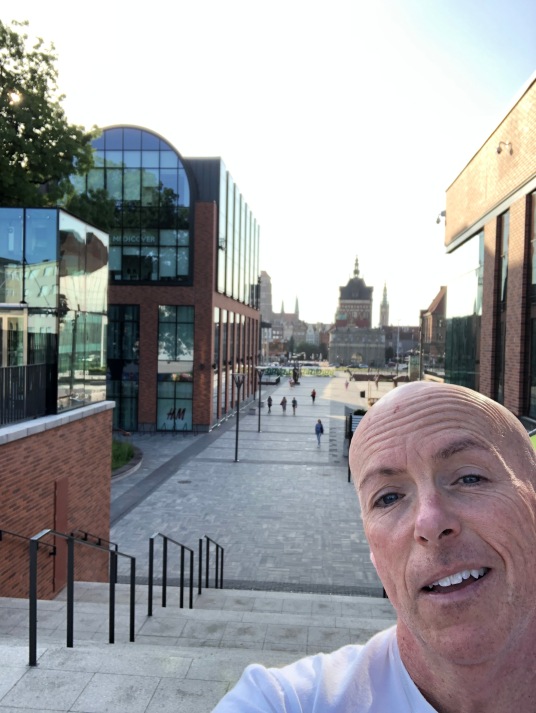 Jogging in Gdansk: Nostalgic feelings while I jogged ALONE at 6 AM remembering when I pushed and meandered with a stroller in 90 heat 9 years before.

The Millennium Cross above Gdansk Glowny is great not only for a photo op, but because of the bunkers with history mechanical/audio-visual history lessons.

Hill behind Gdansk’s Train Station that overlooks the city.

World War II Museum: Gdansk, Poland. Man’s inhumanity to man. History is full of cruel people who make others their victims. This short video Jews in Poland World War II    shows how Jewish people were abused by Nazis before World War II. Take a close look. There are neither facial differences nor skin color differences. It’s all about people’s cruel character not race, creed, nor color.