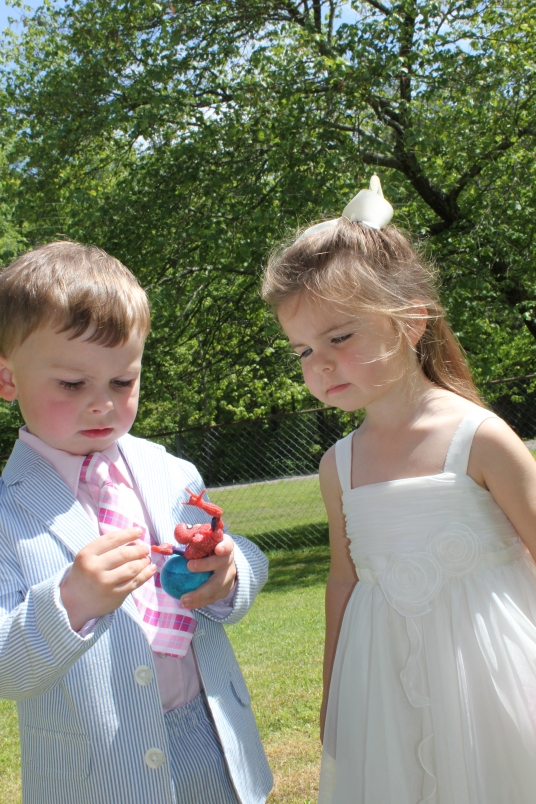 Carter and Ammon
Okay, to begin with, I don’t have a bath picture of Carter and Ammon.
Ammon picked me some irises Saturday evening then Sean gave both Carter and Ammon a bath. During the bath, I stayed in the kitchen (some 40 feet away from the bathroom but with CLEAR ear shot) to do some cleaning. It wasn’t exactly the conversations that were clear and enjoyable but the laughter. I just had to stop and enclose the moment in my “Carter and Ammon treasure chest” that is in my heart.
My Nanny Caylor and I were parents at two different times in life: I became a parent at 42, and my Nanny became a parent at 21. However, when the laughter started I had a flashback of my Nanny telling a story about my father and his younger brother when she was a young parent. In 1944, Nanny, Granddaddy, my father, and uncle were in Brunswick, Georgia where Granddaddy was working in the shipyards to fulfill the government’s requests to keep Granddaddy working for the government without being drafted. They were living in “modern” apartments with showers: running water and showers were not a part of their house built in 1867 back in good ol’ Varnell, Georgia. Nanny was telling me the story in her kitchen about a year after my father, her son had died. It was probably the autumn of 1983. We were talking about modern conveniences, and she was telling about how modern the Brunswick apartments felt in 1944. Daddy and his brother were at the ages of like 5 and almost 2 in 1944, and they would play in the shower for fun and entertainment. That day in Nanny’s kitchen she had a flood of memories, and she said, “I can just hear them playing and laughing in the water now.” It had only been a year since the death of her eldest son, and we were all still grieving. She was standing at the stove, stopped, and tears began to fall down her cheeks. Missing my father, I got weepy as well. There was no wailing, but we had a brief cry then continued with our evening.
Last Saturday night, I became “misty-eyed” again thinking about my love for my father and my grandmother and shed a tear of happiness for having my Carter and Ammon. Since their births, their laughter has become my most favorite sound on earth.