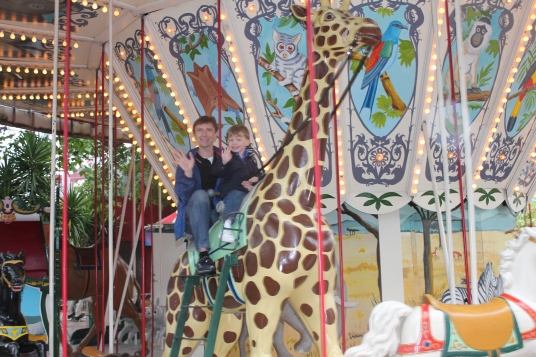 Early spring of 2012, Sean and I debated on several days in Copenhagen with a horrible itinerary flying back to the United States to home or making it to London, England with a very comfortable and accommodating itinerary home. Since we (Carter and Ammon included) enjoy London, we chose a one day tour in Copenhagen. Like several other places, guess what we’ve decided? You got it! We want to return to Copenhagen.

The Baltic Cruise was round trip out of Copenhagen. Both the embarkation and disembarkation days were cool and rainy: quite depressing. It was a shame that this lovely, seaside city looked so gray and dreary. However, like I said it is a pretty city.

Both Ammon and Carter thought it was cool to see the “original” Little Mermaid from Hans Christian Anderson’s fairy tale. We also visited a quaint cathedral, but the highlight of the excursion was Copenhagen’s famous Tivoli (a world-renowned amusement park). We did not have much time there, but Carter and Ammon got to ride a carousel (it’s kind of becoming their “thing” to ride carousels from around the world…LOL).
So, too quick of an excursion for such an interesting and pretty city. Lord willing, we will return.