General Tso’s from the Caylor-Browns

Ammon & Carter are From the Year of the Rat (2008), so we made them Rat Masks for some Chinese New Year “ownership” 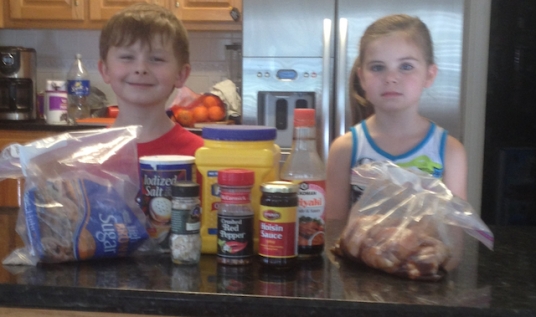 Step 1: Marinating the Chicken Thoroughly rinse then marinate the uncooked chicken breast strips with approximately ¼ cup soy sauce in a gallon freezer bag. Place the freezer bag in a refrigerator crisper. I know marinating often only takes minutes, but I choose to marinate for at least 12-18 hours ahead of time.

Step 2: Baking the Chicken Set the oven 350° 1-2 hours before mealtime. Place the marinated chicken breast in a baking dish. I keep the marinate on for added flavor as well as adding water so as to submerge the chicken (keep it moist, if you will). Cover with the dish’s lid or aluminum foil. Bake for 1 hour.

Step 3: Making the Sauce while the chicken bakes In a bowl, mix the cornstarch with COLD water (remember corn starch CLUMPS in warm water). Wisk thoroughly. Add the brown sugar, Hoisin sauce, ketchup, soy sauce, ground ginger, and crushed pepper. Set aside. *If you choose and are blessed with lots of skillets, you may want to pour this sauce in another skillet while the chicken cubes brown. I tried it only one time (seen below), and I didn’t like the clutter on the range eyes. 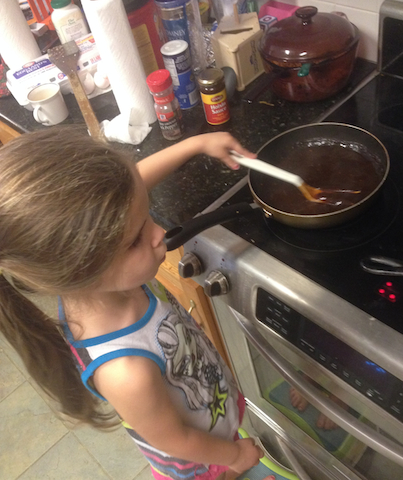 Step 4: Making the chicken coating before frying the baked chicken Take out the baked chicken and allow it to cool (strips cool QUCKLY). While it is cooling heat your favorite wok or skillet (ours is cast iron….woo hoo! I love cooking with cast iron!) on a low-medium heat with 2 Tbs. of oil. Cut the chicken into cubes. In a bowl, mix the Corn Starch, Salt, Pepper, & Egg whites. Transfer the liquid into a Gallon plastic zipper bag. Place the cubed chicken in the bag as well then shake, shake, shake (Ammon & Carter love it… we often sing “Shake your chicken” to the tune of “Shake your Booty”). Turn the skillet up to medium high and pour in the chicken turning occasionally to allow the batter to brown. No need to check chicken temperature, it was baked through in the oven. When the cubes are browned, turn the heat down to simmer/heat. Add your sauce over the cubes. For approximately 10 minutes, stir occasionally making sure the cubes are covered with the sauce.

Step 5: Putting it all Together Pour the liquid over your Chicken cubes, and Guess what? General Tso’s Chicken is done. Serve over steamed broccoli and whole-grain rice of which both I can share another preparation recipe another day.